Speaking 40 years ago my grandfather mused

I’m often asked ‘How does one become a naturalist?’ Looking back, I’m sure nearly all the little boys and girls I played with and walked round the fields, lanes, woods, cliffs and beaches with were curious about flowers, caterpillars, snails, crabs and seaweeds. Some of us were encouraged by our parents, grown-up friends, and by older children who knew more than we did about the names of things. Others were not so lucky.

We begin very simply by looking at the life about us. We hunt creatures… we pick flowers. If people are kind and quick to share their fuller knowledge, we can go on being naturalists. I think the proper question to ask should be ’How is it there are not more naturalists?’ I know the answer to this one: grown-ups arrange too many other activities for the young.

His answer certainly resonates today. Where once they were free to roam, children’s time and movement are more scheduled, directed and restricted than ever before. Children are spending less and less time outside in nature. Vanishing green space, time poor parents, traffic, risk averse culture, the rise of screen time, and a nature starved curriculum are just some of the causes.

Not only are children suffering now, with childhood anxiety, depression and obesity on the rise, if they don’t connect with nature they will be poorly equipped to defend the natural world from harm in the future.

There’s nothing else for it, we must re-wild the child!

Two summers ago, having qualified as a Forest School practitioner, I decided to do just this, and Wheatfen Forest School was born. I now run three regular groups.

Tiny Acorns is a group for pre-school children and their carers. It’s an opportunity to connect with nature right from the start just by being and playing together in the wood. While much time is spent listening to the birds, crawling after ladybirds and rolling in leaves, sometimes the very small people actually do some conservation work. If Phyllis could have seen 3-year-old Joe gleefully attacking rhododendron with specially made, light-weight, Scandinavian loppers recently, I know she would have been pleased!

Saturday Forest School exists to promote self-esteem, creativity, confidence and independence in children through the mastery practical skills, experiencing risk and challenge, and having fun! Using Surlingham Wood as a microcosm of the world, children learn to respect the environment and make ecologically sustainable life choices.

The group which really follows in Ted’s footsteps, though, is Young Explorers. Children who are particularly interested in science and nature come along and begin to learn some practical naturalist skills and vocabulary to set them on their way. We do experiments and go on expeditions together, learning the basics but also following the children’s enthusiasms, spontaneous events and the changing seasons.

Like many children today perhaps, granddad couldn’t learn about the things he really wanted to know at school. Luckily he was able to find his own teachers – gamekeepers, wildfowlers, anglers, and occasionally tramps and gypsies, who he met on his solo expeditions. “[They were] all open air people who shared my pleasures in one way or another.” Even the town rat catcher became one of his teachers!

Kids don’t meet the world on their own terms in that way nowadays, and therefore miss the opportunity to find grown up guides independently. Taking inspiration from Ted’s approach, and with support from the wonderful South Yare Wildlife Group, I set about inviting local naturalists to share their knowledge with the children. Many generous people came forward.

We had a memorable trip to Derek Howlett’s shell museum caravan in Rockland. The next week Derek kindly came and showed the children how to find living snails at the nature reserve. The autumn high tides had conveniently provided flood debris full of intriguing examples, such as Viviparus Viviparus which, unusually for a snail, gives birth to live young.

We learned that snails are very scarce in the wood due to invasive rhododendron acidifying the soil. This introduced the topic of conservation quite nicely and the next time we met, the children were able to quiz long-time Wheatfen volunteer Rodger Goodrick about what conservation means and why we need to do it. They then did some enthusiastic scrub bashing, followed by experiments to find out what the soil is made from with Dr Marjorie Comley.

More recently we went fishing at Poringland lakes; spotted swallowtails at Wheatfen; visited the Applebee apiary to learn about bee biology; took part in conservation work at Rockalnd Broad; and enjoyed a wildlife safari at Blackwater in Postwick with esteemed local nature writer, Mark Cocker. Who knows where our explorations will take us next?

Seeing the Tiny Acorns, Forest Schoolers, and Young Explorers flourish at Wheatfen I feel certain that, despite the barriers, there will indeed be more naturalists!

Republished with the kind permission of the Friends of the Ted Ellis Trust. 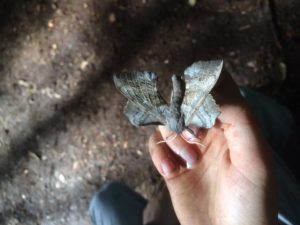